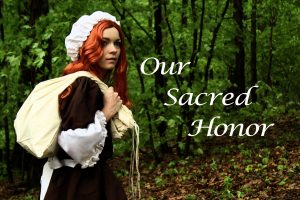 Ann Simpson was a cousin of General Grant’s mother. Ann was born in Buckingham Township, December 29, 1764. During 1780, at the age of 16, she was handpicked by General George Washington to carry messages to his generals while they were in eastern Pennsylvania.

John Davis was born September 6, 1760, in Bucks County. At the age of 16, he enlisted in the militia, helping to fill a quota of 400 men set by the Continental Congress on June 4, 1776. He was with General Washington at the historic crossing of the Delaware on Christmas Eve, 1776. He spent the winter at Valley Forge and again fought the British at Monmouth eight months later. In 1777, Davis enlisted in the Third Pennsylvania serving under Thomas Butler, and participating in the storming of Stony Point. He later served under the command of the Marquis de Lafayette, where he helped carry him from the battlefield during the battle of Brandywine. He participated in the battle of Yorktown and witnessed the surrender of Lord Cornwallis.

Pretty red-haired Ann was an accomplished horsewoman and was a familiar sight to her Tory neighbors.  Ann was the perfect candidate to slip unnoticed through the British ranks. She often carried the secret orders in and around Philadelphia and Bucks County, smuggling messages in the sacks of vegetables, sometimes in bullets and in her clothing. The mills, a center for gossip and news, gave her added cover. Dressing up as an old woman pulled her through many tight spots in Philadelphia. She was never caught, but occasionally had to swallow the messages when she was searched.

John and Ann were childhood friends. Two years after he returned to Bucks County, they were married in June 1783 at her parents’ home. They remained in Bucks County for 12 years during which time five of the nine children were born.

In 1816, John and Ann moved to Dublin, Ohio, to claim land they had received for the Revolutionary War services.  Today, Ann and John lay side by side on a hill underneath a double marker in the Davis Historical Cemetery on Riverside Drive on Route 33, just south of Dublin, Ohio. 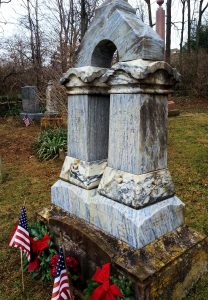 Big Walnut Productions is currently developing Our Sacred Honor, a stage play based on the true stories of John Davis and Ann Simpson.  This production is being designed to support national educational programs.  Our Sacred Honor will be a multimedia hybrid of live stage performance supported by feature film.  The intent is to bring this show to a theater in North Central Ohio, as a tourism and school attraction. It may be tied to a national live streaming educational program for schools, home schools, political and historic events, churches, etc.

In a time when the United States is facing tremendous growth but is also being torn apart by opposing ideologies, Our Sacred Honor is intended to inspire and to promote a sense of appreciation for the United States and for its history.